background: this blog is birthed in the fourth module of UCT’s PGDip (= University of Cape Town’s Postgraduate Diploma in Educational Technologies). As with all our courses, nothing is done in vain, and this blog will initially be used as a reflection on what we learn during the fourth module, possibly for some of the assessments, but in the wider scheme of things, it will live on long after September 2015.

Because my day-to-day work is in the middle of this exciting edtech Amazon (pun intended) with all its varied eddies, whitewaters and even a few quiet corners for reflection. I have been involved with edtech for more than a decade and plan to swim deeper into it still. It is always exciting, always challenging and never dull.

But let me quickly regale you one some images that barely begins to transfer the fun we’ve had and the new skills we’ve acquired thus far.

We’re a great group of students from all over Africa. With lots of groupwork as part of the course, we’ve quickly grown close and some of the more energetic students even meet socially after the course to get to know Cape Town a bit better. 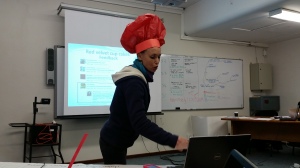 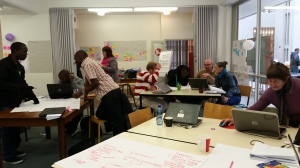 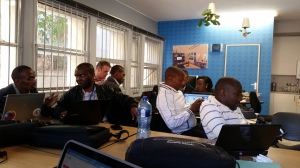 We’re privileged to study at the University of Cape Town – where the beautiful upper campus is set against Table Mountain itself.

But don’t let the scenic environment fool you. While we were there, the campaign to have the statue of Cecil John Rhodes removed started, and eventually led to the removal of the statue. But not before ole Cecil was wrapped and painted by students wanting a voice. The ‘have your say’ boards allowed for visual debate at the statue.

We’ve made great friends during this course thus far. And we love playing in this sandpit! 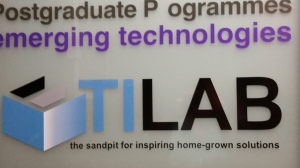